Enlightenment from within the Cloister?

The Community are delighted to invite you to a talk

Enlightenment from within the Cloister?

Dr Cormac Begadon is Assistant Professor (Research): Sepulchrine Fellow in the History of Catholicism at Durham University.  He is currently engaged in the 2nd year of ground-breaking research based on the Community archives.

Cormac is principally a historian of the eighteenth century, with a particular interest in how new ways of thinking and political movements shaped the lives of Catholic religious. His current research examines the history of the Canonesses in this period and the way in which their convent at Liège flourished in the eighteenth century thanks to the Community’s embrace of enlightened thought.

As background to the talk and summarising his research, Cormac explains:

“Traditionally the marriage of ‘Catholic’ with ‘Enlightenment’ has been something that appeared to many as contradictory. Even Catholic historians until the 1960s were said to have been embarrassed by the fact that there had been a positive and enthusiastic engagement by the Church with the Enlightenment, which as they saw it, sowed the seeds of irreligion and tyranny that the French Revolution subsequently unleashed. Fewer still suggested that there was a real and meaningful engagement by Catholic female religious with this seismic intellectual movement. New and exciting evidence from the Canonesses’ historical collections, however, points to such an interaction and embrace of new ways of learning. Dr Begadon will discuss how the Community, led by Sr Christina Dennett, revolutionized their school at Liège, which went on to become internationally significant, advancing a new and progressive system education for girls inspired by enlightened ideals, whilst also painting a picture of the very cosmopolitan nature of the Community and convent, all of which will question the way in which we understand convent life.” 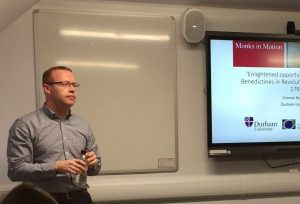 Use this tool to manage your registration.